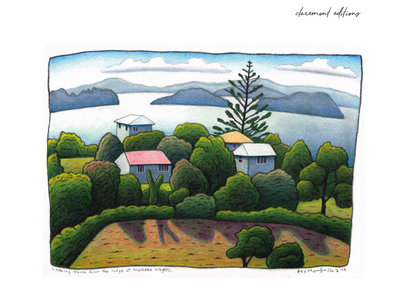 When Claremont 56’s first compilation series, “Originals”, came to an end in 2013, Paul “Mudd” Murphy decided not to replace it, choosing instead to pour his energy into promoting albums and singles from the label’s growing family of artists. Six successful years later, Murphy has had a change of heart and decided to inaugurate a brand new compilation series, “Claremont Editions”.

This time round, the focus won’t be rare and obsure cuts selected by DJs, but rather new, unheard and overlooked recent material from label stalwarts, new artists and friends Murphy has made along the way. The first volume of “Claremont Editions” is naturally rather special, offering a vibrant and colourful trip through Claremont 56’s distinctively warm, sun-kissed and emotion rich sound. As befits a compilation that will be desired by DJs and sofa-bound listeners alike, Murphy has selected a mixture of dancefloor-friendly workouts and hazy, horizontal fare.

The compilation kicks off with something rather special: a chugging, mind-altering late night cover of Eagles classic’ “These Shoes” by Angel Spells, an all-star collective featuring 40 Thieves’ Layne Fox on production, David Harks on vocals and Jack Cutter on guitar. The results are trippy, hypnotic, mind-altering and alluring: a 21st century West Coast voyage that never loses sight of its 1970s roots.

It’s followed on side A by another stellar cover: a jazzy and breezy disco-reggae version of Hall & Oates’ classic “I Can’t Go For That” by HF International. The version here is Kaoru Inoue’s “disco dub”, which does a great job in showcasing the eyes-closed guitar solos provided by guest musician Kashif. Completing record one is an absolute epic from German krautrock combo Fursattl, who return to Claremont 56 after a seven-year hiatus. The Frank Mollena-helmed outfit offers up “Leerlauf”, an 11-minute journey through heavy punk-funk grooves, Stereolab synths, backwards guitars and constantly building percussive energy. Like their previous 12” on the label, it’s staggeringly good.

Hear & Now kick off with record two with “Alba Sol”, an undeniably gorgeous, sun-baked trip that recalls the lazy, slow motion beauty of their 2018 debut album “Aurora Baleare”, before Murphy transports us back to Japan and the quirky trip-hop-pop of new signing Yamp Kolt’s languid and groovy “Fuyu No Ne”, featuring the blissful vocals of Karin Miyagi.

To round things off on side four, Murphy has reached for previously unreleased cuts from the label’s vaults. First Essex trio Statues doff a cap to Pink Floyd on the lazy, multi-coloured trip that is “Heaven Fades” – nine minutes of softly spun grooves, dreamy vocals, toasty Rhodes riffs and David Gilmour guitars – before Murphy dusts down a previously unheard track by the late, great U-She and Holgar Czukay.

The cut in question, “Longing”, offers a stunning – if poignant – conclusion. Low-slung, atmospheric, eccentric and lusciously string-laden, the track was recorded by the husband-and-wife duo some years ago and was intended to form part of an album called “Second Life Identity”; here it provides a stirring, breathtaking finale to the first installment of “Claremont Editions”. Given the quality of this collection, we can’t wait to hear volume two.